The Monsignor Martin Women’s Hockey Team lost a heart breaker to CASH (Clarence/Amherst/Sweet Home) 4-3 in the semifinals to bring their season to an end.

Despite the loss, the team had quite the season, going 12-5-2 in regular season play.  The Monsignor Martin Team is comprised of girls from the different schools that make up the Monsignor Martin Athletic Association.  St. Mary’s has three players on the team—sophomore Riley Malicki, and freshmen Claire Rahuba and Caleigh Pfalzer, along with head coach and Lancer parent, Chris Malicki.

With all three Lancers being underclassmen, they will have a shot to get after an elusive championship next season. 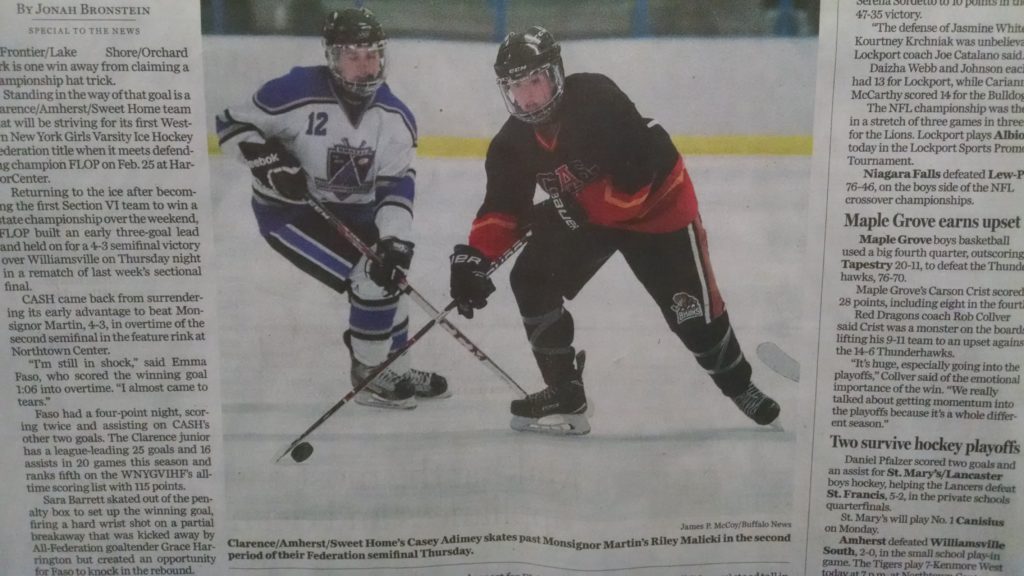 Chris Malicki finds himself in a familiar role – behind the bench of the Monsignor Martin Association girls hockey team.  After taking a brief hiatus to focus on coaching his daughter Riley – a sophomore at St. Mary’s High School – on her travel team, Malicki was asked back to coach the Monsignor Martin team after the former coach stepped down nine days before the season opener.

Malicki knew he would already be around for practices and games because his daughter was on the team, so it seemed like the perfect time for another go around.  Malicki does admit he was slightly apprehensive about taking the role, as having a daughter on the team can add an interesting dynamic: “I coached my older daughter on the Monsignor Martin team my first go around, and now I’ve got Riley,” Malicki said.  “You definitely tend to be tougher on your own kids as a coach, but Riley handles it really well.  She’s a trooper.”

Malicki has some high expectations for the Monsignor Martin team in the league this year, and the team is off to a 3-0 start.  Coach really only set one, simple goal for his team at the beginning of the year: “Be better hockey players at the end of the season than you were at the beginning.”  Malicki also noticed two main themes in the league this year that seem different than years past- parity and the quality of goaltending: “There is a tremendous amount of parity in the league this year, where the top four teams are all outstanding, and on any given day, any one of us could win the whole thing,” Malicki said.  “Each team also has really good goaltenders, so any goalie could steal a game or two for a team, and we have two great goalies ourselves, so that’s exciting,” he added.

With 30 years of hockey experience, playing for St. Francis High School, University at Buffalo, and at the Juniors level, Malicki is really enjoying being a part of the team: “There is obviously a learning curve of them getting to know me and my coaching style, but they have adapted really well.  I have loved getting to know the upperclassmen who I just knew from afar, and it’s just been awesome,” he said.

St. Mary’s Head of School Kevin Kelleher knows how valuable a good women’s hockey program can be for each school in the Monsignor Martin: “We are thrilled to have three student athletes participate in women’s hockey and to have a Lancer parent behind the bench; to have such strong ties to the league is tremendous,” Kelleher said.  “We know interest in girls hockey is on the rise, and we support that at St. Mary’s, so have a connection to the league ‘in-house’ is paramount.”

Girls hockey in Western New York may be a small community, but it is tight knit and on the rise.  Many of the girls on the team already know each other, playing eight months of the year on travel teams, either with or against each other.  There seems to be a growing interest for girls hockey in the area, thanks to the increased exposure from the National Women’s Hockey League’s Buffalo Beauts and the success of the Women’s National Team.  Malicki has observed a steady progression: “When I coached the first time around, there was only one girl from St. Mary’s on the team, and now there are three [Riley Malicki, Claire Rahuba, and Caleigh Pfalzer], so you can definitely see growth there.”

Malicki urges each school that is a part of the league to promote these hockey players as you would all other student athletes: “We’re proud to represent St. Mary’s, and each school needs to step up and publicize our league because these girls are amazing, and other girls are really starting to look for schools offering hockey,” Malicki stated.  “It’s a sport here to stay.”

The MMHSAA girls moved to 3-0 on the season, beating Kenmore/Grand Island (0-4) 3-2 last night at Riverworks.
Ken/GI struck first with a shot from the left that finished in the right netting, just out of reach of sophomore goalie Grace Harrington (Mercy), just over 3 minutes into the game. This would be the only goal Ken/GI would score until the final minute.
MMHSAA evened the score up with a minute left in the first. Fionna Danahy with the goal (Mercy) from Ellie Cleary (SEM) & Kayla Blas (SHA).
The MMHSAA's second goal came from Emily Matthew (MSM) with some nifty stick work to finish 1 on 1 with the Ken/GI net minder, Anna Fischer (SHA) with the assist.
The ultimate game winner came with 9' left in the third, when Izzy Friedman (Nardin) dished a puck off to Emily Matthew who again, took the puck up the ice and finished to tally her second goal of the game.
Ken/GI scored the final goal of the game with 1:13 left after they pulled their goalie.
Shots were even, 22 shots each. Grace Harrington made several fantastic saves in goal, including a few great breakaway saves when the score was tied at 1.

Undefeated no longer. The MMHSAA girls varsity ice hockey team (2-0) took down defending Federation & Section 6 champ FLOP (2-1) last night with two goals in the third to win 4-3.
Kayla Blas (SHA) opened the scoring in the 1st on the PP, assisted by Marcella Rogers (COH). FLOP would even up the scoring 8 minutes later with a PPG of their own, off a deflection where junior goaltender Isabella Battaglia (COH) had no chance.
FLOP would pull ahead in the 2nd off of a rebound from a pad save from Battaglia, however, the lead didn't last long when Izzy Friedman (Nardin) evened up the score with a goal from the far side (asst. Emily Matthew, Blas). FLOP regained their lead with a slotted puck across the front of the goal that was finished far side.
The score remained 3-2 throughout the majority of the 3rd period until Gracee Donovan (Mercy) tied the game up with 3:35 left in the third. Kayla Blas would score the game winner 2 minutes later. The girls held off a late fury from FLOP, including a huge save from Battaglia on the line (literally!) as time expired.
The MMHSAA was outshot 29-23. Battaglia made 26 saves to earn her first victory.