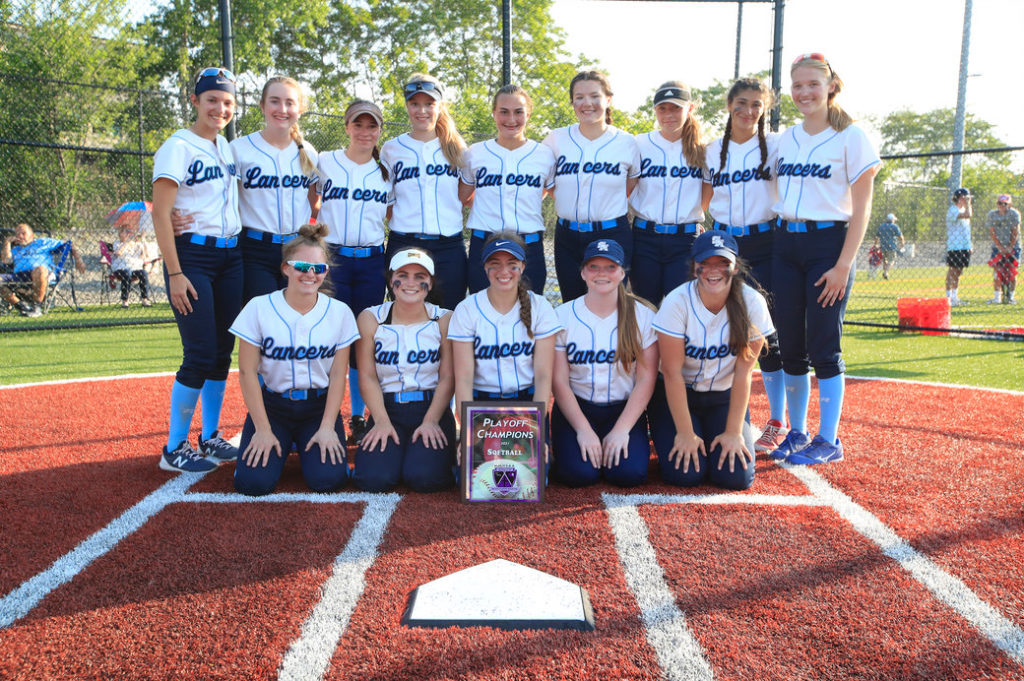 he crowd at the Nardin Athletic Complex practically held its collective breath until the final out of the Monsignor Martin Athletic Association softball championship game.

While everyone watching was in suspense, Anna Dovey, pitching in relief for St. Mary’s of Lancaster, showed no obvious signs of distress in the seventh inning of the title game Wednesday, even with two outs and the bases loaded. Nardin had just scored two runs in the bottom of the seventh inning, and cut what was once a seven-run lead for the Lancers to two.

As she worked in the pitching circle, Dovey remained confident in her defense in the final half-inning. She struck out two batters, and then got Nardin’s Rosalie Dehn to fly out to centerfielder Isabella Farina, whose catch capped off an 11-9 win for the Lancers, the No. 2 seed in the Monsignor Martin playoffs.

“I knew we were all good in the seventh,” said Dovey, who after the win was named the Monsignor Martin player of the year. “I wasn’t nervous.

“But seeing that final catch (by Farina) was fantastic. The feeling, the rush and emotion to see that, I can’t explain it.”

Dovey and her defense completed a championship game in which they opened their lead to 9-2 in the top of the third inning, then had to hold off a Nardin team that chipped away at the Lancers’ lead, first with a five-run fifth inning, and then by loading the bases in the bottom of the seventh.

What impressed Nardin coach Christina Fanara was how her young team responded in a championship setting.

“This is going to be huge,” said Fanara, whose team was Monsignor Martin’s top seed. “I had a relief pitcher that was a freshman come in. The starting pitcher is a junior, so we have her for another year. Honestly, the foundation of this team is pretty much made up of freshmen or sophomores, so we have a couple good years coming.

“Having such a short quick season, they didn’t have much time to practice or play together, so showing how much we came through and came back today showed a lot, especially for the young players.”

The Lancers took a 2-1 lead into the second inning, when Dovey’s RBI single drove in Farina, and Dovey scored on a wild pitch in the top of the first. The Lancers appeared to take control of the championship game with a seven-run, seven-hit third inning. St. Mary’s sent 13 batters to the plate in the top half of the inning, including four batters who faced Nardin’s pitchers twice. By the time the Lancers took a 6-1 lead, pitcher Mia Gilham had replaced Nardin starter Grace Appelbaum.

Then, on the second pitch she threw to Ally Beardi, Gilham gave up a three-run home run, which gave the Lancers a 9-1 lead.

“We knew we had to jump on them, and if we did that, we knew it would end up in our favor,” Dovey said.

Alexandra Packard’s two-RBI double in the top of the fifth gave the Lancers an 11-2 lead, but the Gators’ offense answered. After Julianna Verni drove in Dehn, Emily Gorman’s grand slam in the bottom of the fifth helped Nardin cut an 11-3 lead to 11-7.

Then, Nardin began its final attempt at a rally in the bottom of the seventh, when the Lancers committed an error that scored two runs with nobody out, and Dovey walked Anna Castlevetere to load the bases.

“I made some bad pitches,” said Dovey, who relieved Packard, the starting pitcher for St. Mary’s, in the bottom of the fifth, after Gorman’s grand slam. “But I knew I could trust my defense, and I beared down and had to finish.”

Fanara, however, saw the resilience of her team shine through, even down to the final out.

“They didn’t give up," Farana said. "They were down 11-2 at one point, and most teams would have just given up, hung their heads and taken the loss. They just kept battling, right to that last out. Having the bases loaded with two outs, and needing two runs, we just couldn’t capitalize. Next time, I’m hoping they will.”