In quite the historic season for the Lancers Baseball Team, we defeated St. Joe’s 5-3 in the decisive game 3 of the series to win our first Georgetown Cup in 39 years! What a team. What a season.

Check out more of the story from Rachel Lenzi of The Buffalo News:

The St. Joe’s baseball team had just cut St. Mary’s of Lancaster’s lead from four runs to two, and St. Mary’s pitcher Brady O’Brien needed a minute to gain his composure in the bottom of the sixth inning.

Two runs weren’t going to force O’Brien, the Lancers’ starting pitcher, to leave the game Thursday at Canisius College. He and the Lancers weren’t going to let the Marauders back into the game, either. That had already happened a day earlier, in the second game of the best-of-three series for the Georgetown Cup.

“We’re up four and I thought, ‘Don’t get too comfortable,’ ” O’Brien said. “But I knew that if I could control my pitches on the mound, there was no way they were beating us.”

After giving up two runs on two hits to St. Joe’s, O’Brien and the Lancers settled down and Jack Gilbert grounded out to end the sixth. An inning later, the Lancers closed out a 5-3 win for their second Georgetown Cup in program history and first since 1980.

“It brought back some memories from (Wednesday) and we knew what happened,” said O’Brien, who struck out four batters and allowed six hits in a complete game. “We were up 10-6, but you always have to stay confident when you’re on the mound. That’s how I am up there, and when I’m confident, I know I can get the job done, and the job today was to get a win. That was our job.”

The final two innings, however, became a test for the Lancers (19-7), as St. Joe’s batters found their rhythm. Vince Capolupo’s two-out double in the bottom of the sixth for the Marauders (17-12) drove in Sam Murphy and Mitchell Floccare, and cut St. Mary’s lead to 5-3.

“It was insane, just the intensity of it all,” said Tyler Kerl, who had two hits and drove in two runs for St. Mary’s. “They tried to chirp us and get us fired up, but we just kept composed. It’s a mental game.”

The Lancers also shut down St. Joe’s second attempt at a rally in as many days; the Marauders rallied to score four runs and tie the game in the seventh inning Wednesday, en route to a 12-10 win that forced a decisive third game in the series.

“They played hard, this was a tremendous series, and they went and grabbed it,” St. Joe’s coach Paul Nasca said. “It was nip-and-tuck, all the way through, every game, and we came out on the back end. But I’m extremely proud of the effort of our kids. They showed a lot of resiliency throughout.”

Will Carlone’s RB triple drove in Tino Turello to give the Marauders a 1-0 lead in the bottom of the first, but St. Joe’s left three runners on base in the next four innings and St. Mary’s limited the Marauders to three hits in the first five innings.

Luke Stablewski tied the game at 1-1 for St. Mary’s in the top of the second, when he scored from third on an error. O’Brien’s triple in the top of the third drove in Chris Nieno and gave the Lancers a 2-1 lead.

“Yesterday was not what we wanted to happen, but we came in, we scratched it, had a great practice before the game and everything just happened, right there and then,” O’Brien said. “It feels good.”

In a game that lasted over two days—yes, that’s right, two days—St. Mary’s fell to St. Joe’s in the deciding game three of the semifinal series for the Georgetown Cup.

The Lancers were up 2-1 with one out in the bottom of the fifth, when lightning struck—literally— and play was suspended until the following day.

Picking up right where they left off, the Lancers couldn’t hold the momentum, losing 3-2 in the 14th inning.  Despite the heartbreaking loss, it was another great season for Lancers baseball!

Christian was joined by his parents, Tim and Leigh Szablewski and his siblings, Luke, Emalee, and William, to sign his official letter. 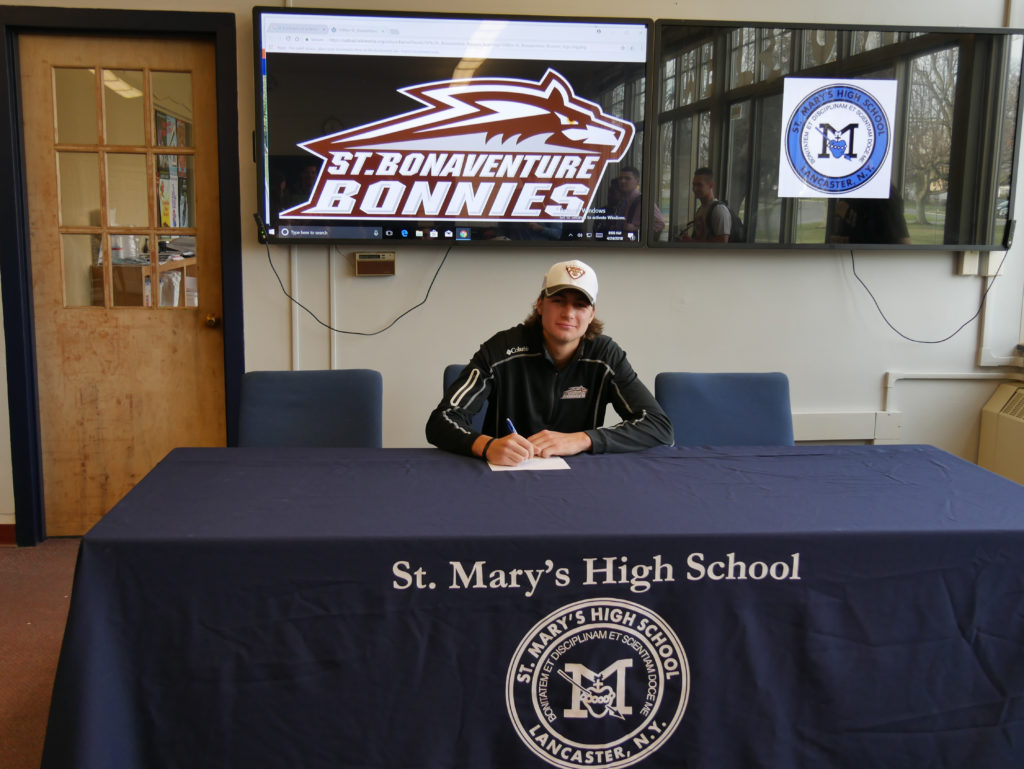 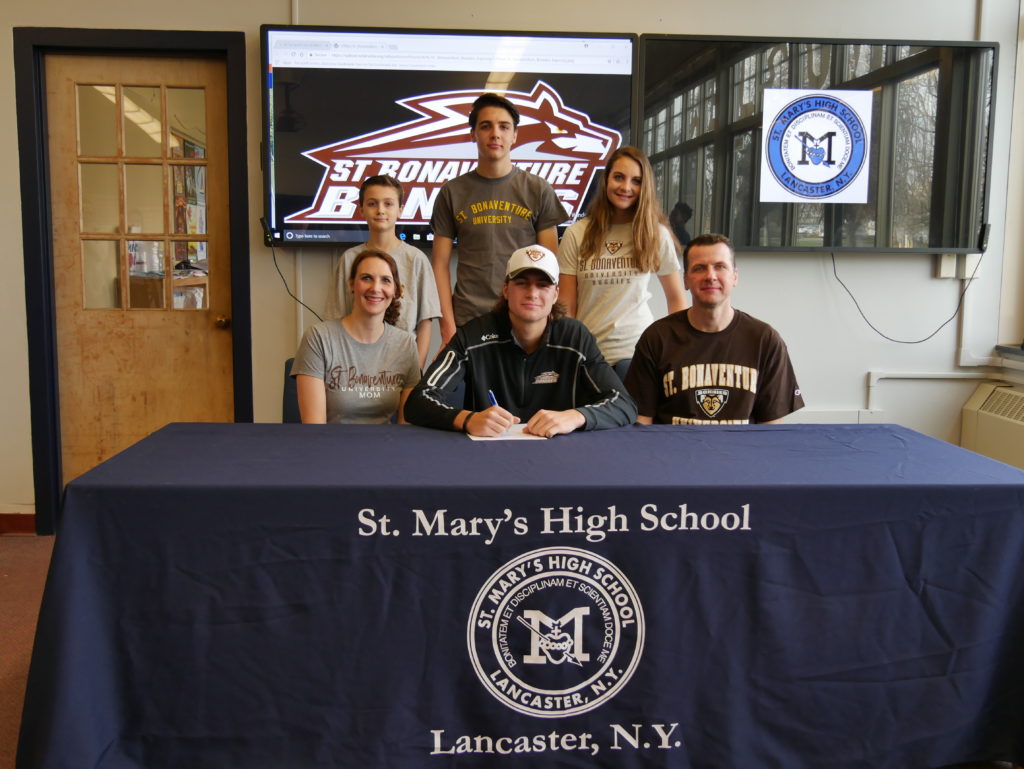 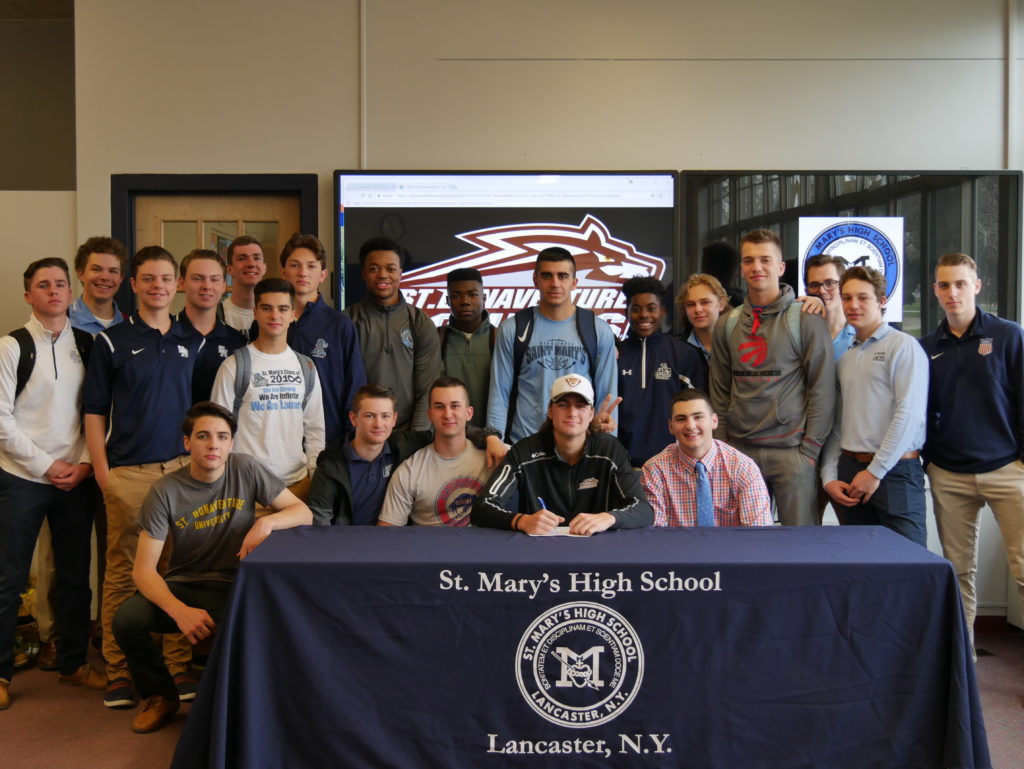