In the State Semifinals, the Lancers took on the Mavericks from Moore Catholic. Behind yet another stellar performance from Sophomore pitching-sensation, Alex Packard, St. Mary’s advanced to the State Finals with a 6-1 win. Perennial powerhouse, St. Anthony’s waited to take on SMHS in the Championship. Unfortunately, the Lancers ran into a buzz-saw and couldn’t take down St. Anthony’s. St. Mary’s had nothing to hang their heads over, as the State Runners-Up brought home hardware from the State Championships for the first time in school history. 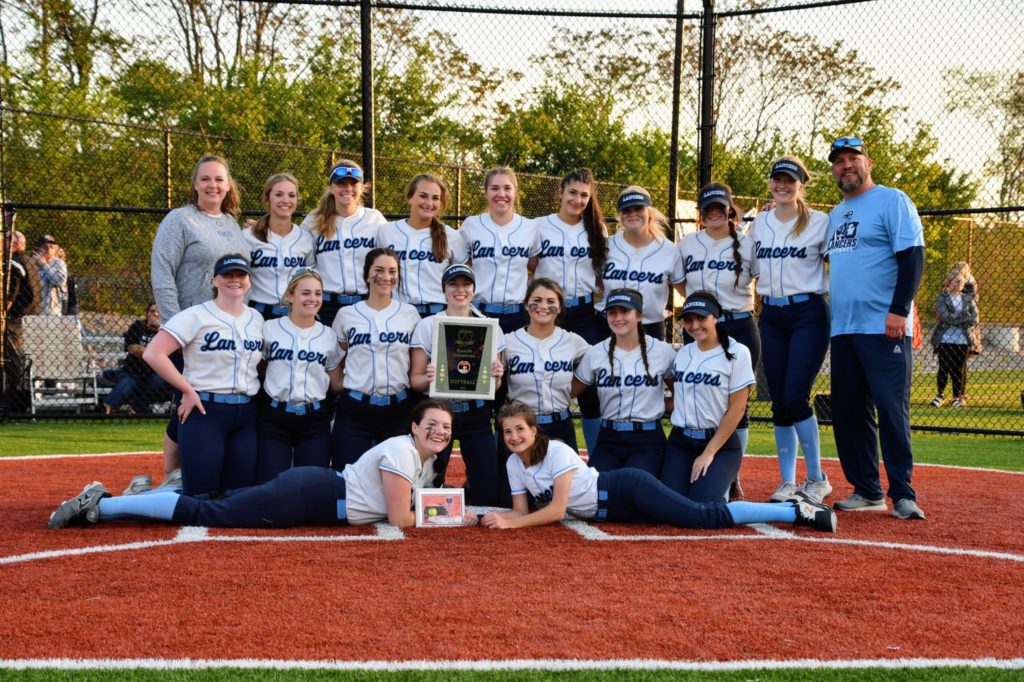 The Lancers Softball Team finished another stellar season. After winning the back-to-back Monsignor Martin Championships, but losing a few key games to start to the 2022 season and rain-outs galore, the girls were able to come together and rally behind coaches Kevin and Missy Hufford to win the 2022 championship!

The team steamrolled Sacred Heart in the semifinals 13-2 and faced the #1 seed Nardin Gators in the finals. In a best-of-three series, sophomore pitcher Alex Packard kept the Nardin bats at bay, pitching 13.1 scoreless innings over two games before turning the ball over to senior Anna Dovey in the circle to record the final two outs. The Lancers took game one 2-0 and game two 8-0 to capture their third straight Monsignor Martin Championship. With the win the Lancers earned a spot in the State Championships on Long Island. 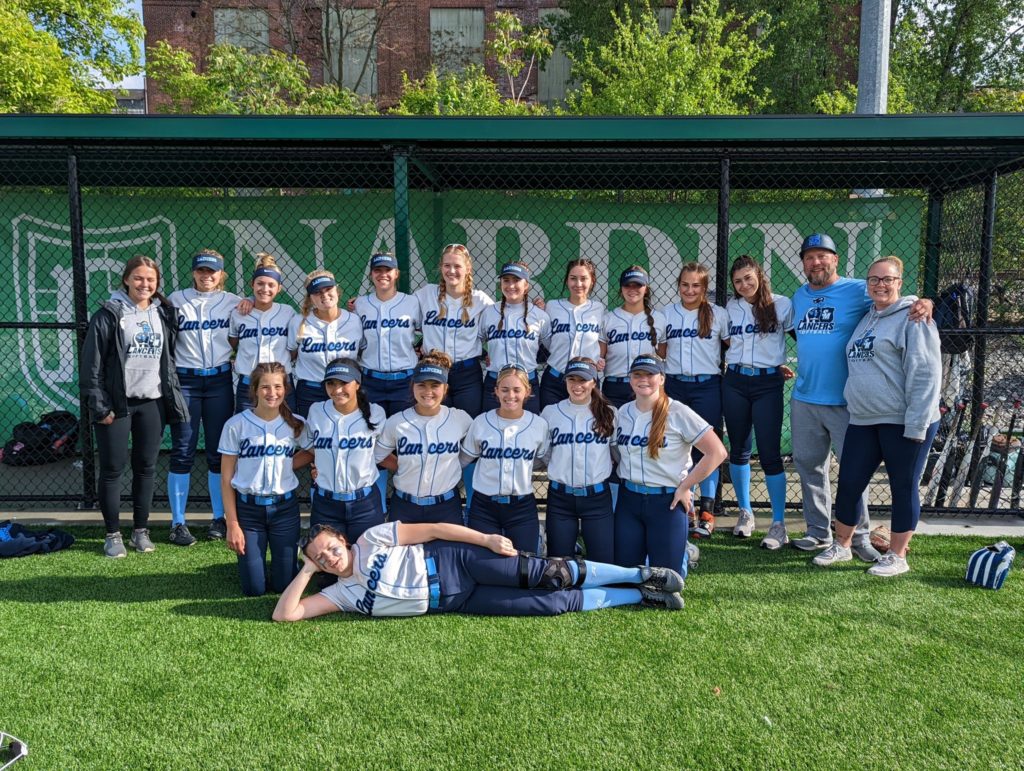 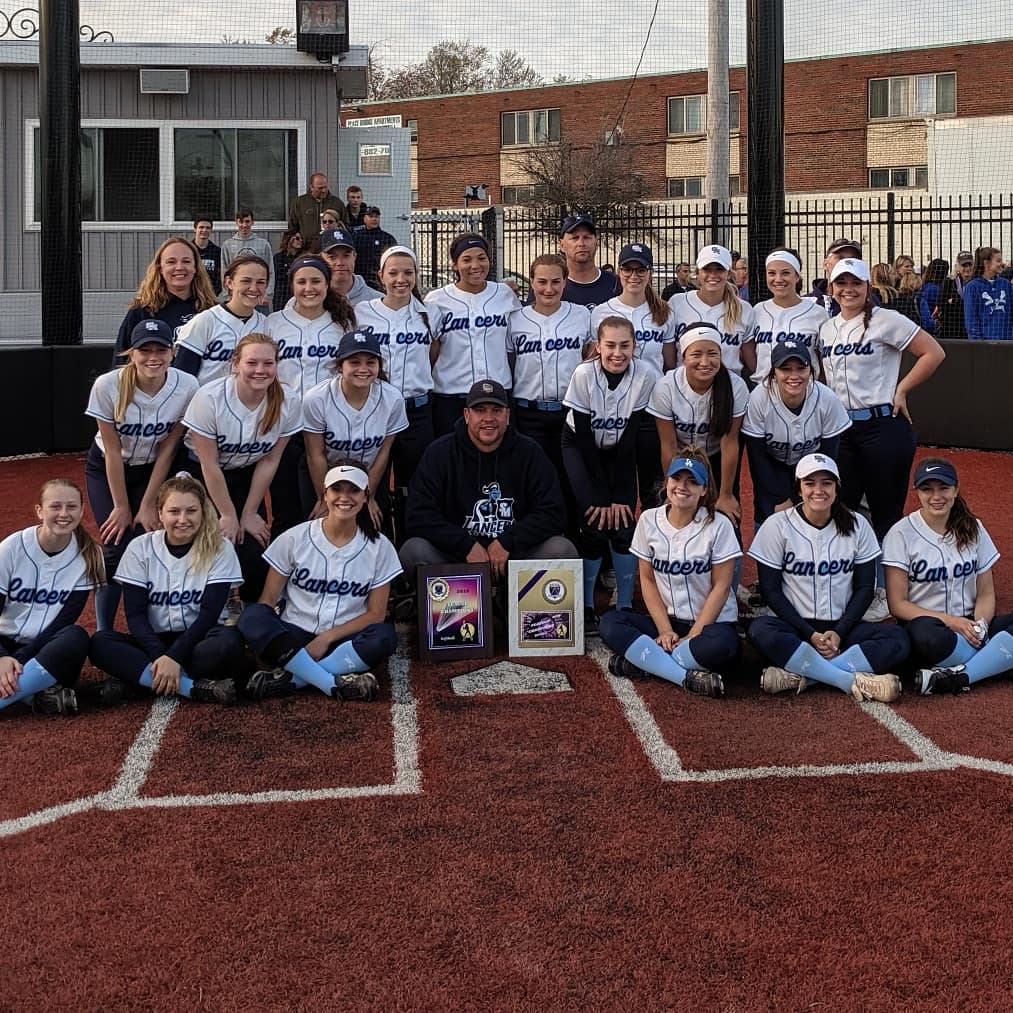 Here's a game recap from Miguel Rodriguez from The Buffalo News:

Torrie Jenkins had her reasons for transferring from Cheektowaga.

The St. Mary’s Lancers (19-2) are beyond thrilled the junior chose to bring her talents to the Laverack Avenue school in Lancaster, as the Monsignor Martin Player of the Year in softball had a big role in helping her new team add another playoff championship to its trophy case.

Jenkins did a little bit of everything for St. Mary’s during a 4-0 title-game win over Mount St. Mary on Tuesday night at D’Youville College’s Dobson Field. Jenkins tossed a complete-game three-hitter, changing speeds and location effectively to keep thwart a young Thunder crew’s bid at earning an historic championship win.

Jenkins also chipped into the offense during a three-run sixth that pretty much wrapped up St. Mary’s third playoff title in five seasons.

“I feel like it’s a big win for all of us and the team in general,” said Jenkins, who struck out five and went 1 for 3 with a run scored. “We really wanted this one.”

“Just a great kid. She was an 8-year old on the last 10-year-old team I coached,” Lancers coach Kevin Hufford said. “She comes from a great family. She works her tail off. .... Thankfully she came to St. Mary’s. We’re very happy to have her.”

The Lancers return to action next Tuesday in the New York City area in the state Catholic semifinals and finals against a still to be determined opponent.

The fact they get to make the jaunt downstate during Memorial Day weekend is a bonus to the program for a simple reason.

The Lancers failed to do it last year even though they believed they had a championship caliber team. They dropped a 1-0 decision in extra innings to Nardin – a defeat that prevented them from advancing to the state Catholic tournament.

St. Mary’s, ranked first in the state in Class C, used that disappointment as fuel to get the job done this season.

Senior Catie Bish gave the Lancers the lead for good with a booming two-out, RBI double to left center in the bottom of the third that scored Riley Malicki.

It remained 1-0 until the bottom of the sixth, when Bish led things off with a walk to spark a three-run burst. Jenkins followed with a single and later scored. Bish scored on a single by Anna Dovey. Savannah Drozda drove in a run with a double.

“Last year’s loss definitely gave us a lot of motivation,” said Bish, who was a member of St. Mary’s championship team in 2017. “We had that in the back of our minds the whole season. This game we knew we had to come in focused and with the right mentality to make sure it didn’t happen again.”

Mount St. Mary, which reach the final for the first time since 2003, seemed to take a 1-0 lead in the top of the third on Samantha Hare’s sacrifice fly to deep center with the bases loaded.

However, the runner at third base failed to tag up correctly and wound up being the third out of the inning.

“She was halfway down the line before I could really say anything,” first-year Mount coach John Rogowski said. “It didn’t really take the life out of us. We were still firing, had the intensity but they’re a great team. From 1-20, they’re loaded with talent.”

Hufford said the championship season wouldn’t have happened without the efforts of Mike Rappl. The former longtime Canisius College coach and Greater Buffalo Sports Hall of Famer joined the program as an assistant when Hufford took over and plays a huge role in getting the Lancers mentally prepared for games.

“I think just because of him, every kid on this team feels if it was their turn they could knock the ball over the fence or drive that run in,” Hufford said. “He does everything for us.”

More exciting news coming out of the Athletics Department! Congratulations to the 2019 Monsignor Martin League Champion St. Mary's Softball Team on being named the Bee Newspapers Team of the Year!

More exciting news coming out of the Athletics Department! Congratulations to the 2019 Monsignor Martin League Champion St. Mary's Softball Team on being named the Bee Newspapers Team of the Year!

The accolades just keep rolling in for the Monsignor Martin League Champs! Congratulations, juniors Torrie Jenkins, Maggie Kellner, and Ava Miller and senior Caitlin Bish on their player of the year and All-Catholic selections! Best of luck to senior and scholar athlete SS Caitlin Bish who is off to Princeton next year to play softball for the Tigers! 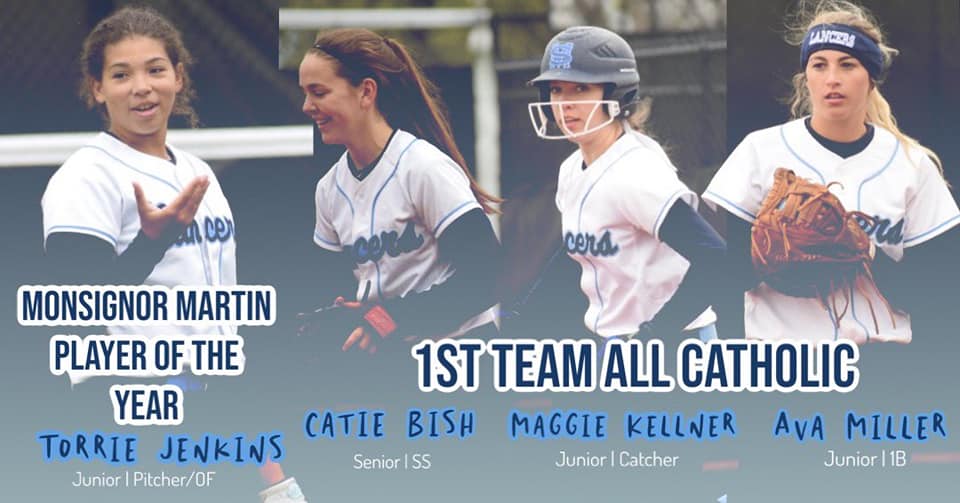 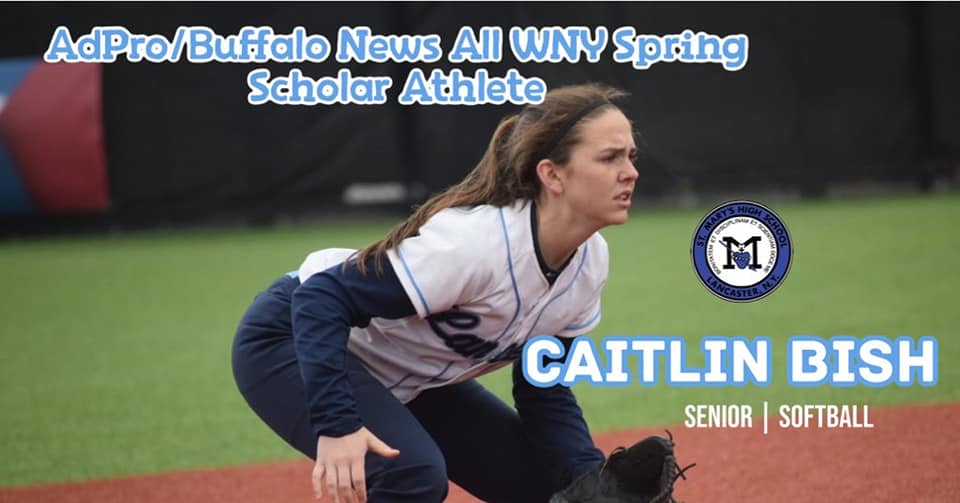 Congratulations to out Lancer Softball Team for winning the Monsignor Martin League title last night 4-0 over Mount St. Mary's! Now, it's onto NYC to fight for the state title. 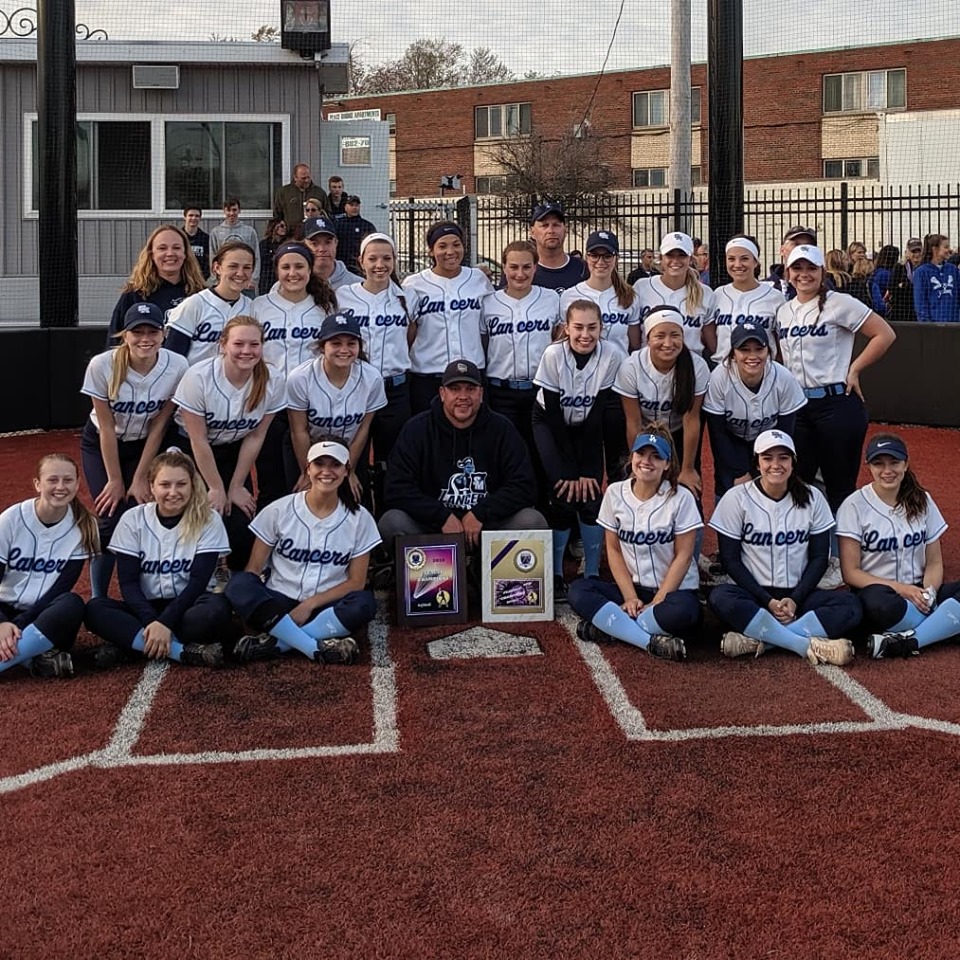 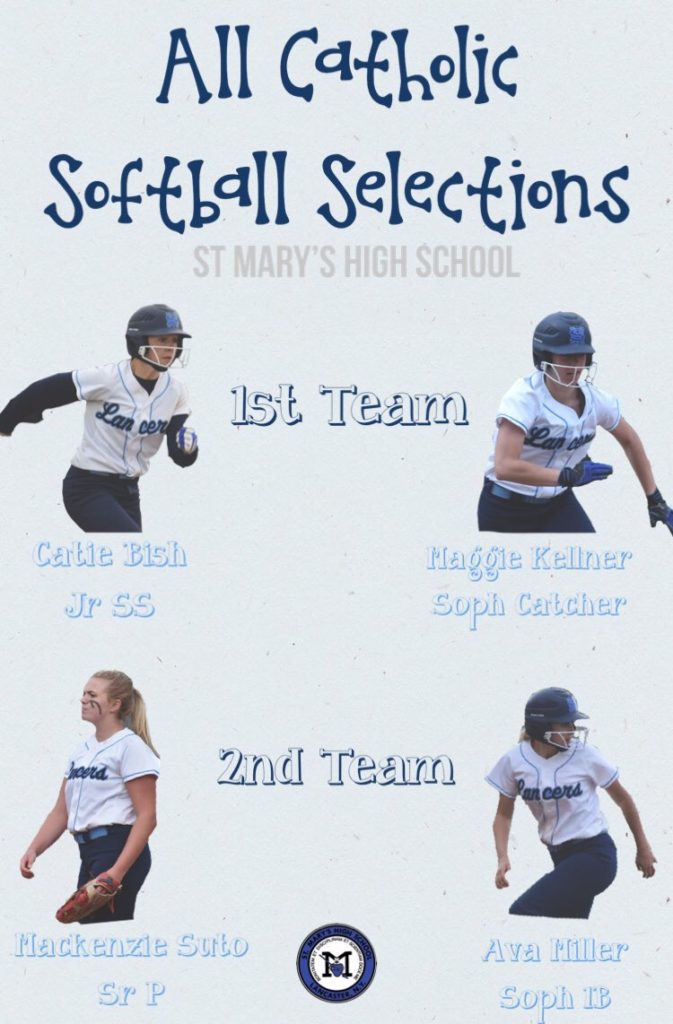 After an undefeated regular season in the Monsignor Martin, St. Mary's softball couldn't quite end the season with a championship, falling to Nardin 1-0 in 10 innings.  Despite the loss, St. Mary's had another amazing season and look to be back at the top of the league next year, with the majority of the roster returning for the season. 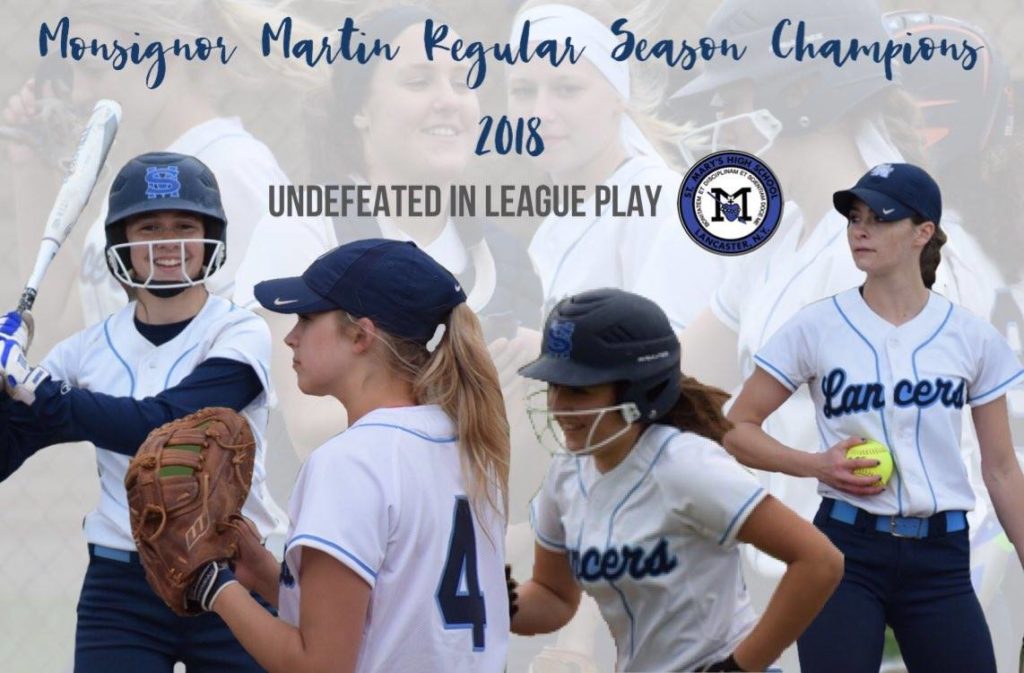